Three ripped shirts, a burst ball and a cut up pitch. The only headlines from the goalless draw in Lille that sees both participants proceed to the knockouts. Draw your own conclusions. France hit the bar late, the Swiss should have head a penalty even later, but that was that.

Simultaneously, Albania were heading to their first ever victory in a major tournament and sending their opponents home. They will wait to see if they've done enough - good news for the proprietors of whatever hotel the team is camped in. 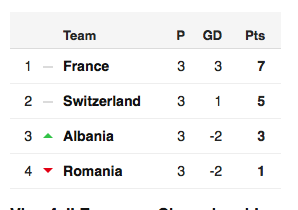 HERE IS AN ARMCHAIR, IDEAL FOR FOOTBALL WATCHING

WHAT? YOU HAVEN'T SPENT TIME IN THESE ARMCHAIRS?

If you're wondering where the flowers are, best move on.